Parishes of Jamaica, Pre-1655 to Present

The current 14 parishes of Jamaica in its current form have existed since 1866, but there were many more parishes before that. Over a period of a couple centuries, parts of parishes were combined, some were eliminated, new ones created. There were 9 transformations and following is a chronology of its evolution along with a brief description of each period.

Use this storyboard for a visual of how the parishes tranformed throughout history, then read the details of each transformation in the section following the storyboard.


How the Parishes Transformed

The English applied their own system of administration once they took control in 1655. The island was divided into parishes with most of names given the designation of "St. (Saint)". Originally seven parishes were named after governors, important persons or places in Britain; Clarendon, St. John, St. Andrew, St. Catherine, Port Royal, St. David and St. Thomas. These combined with the others, some of which were unnamed, made up 14 parishes between 1655 and 1675. During this period Port Royal was a separate parish.

Jamaica and Barbados - by John Speed , published in 1676 ( Showing Jamaica Only)

Between 1675 and 1692, there were 16 parishes. St Elizabeth grew in size to include the land area of 3 parishes that exist today, Manchester, Westmoreland and St. Elizabeth as well as a portion of the unnamed parish that existed between it and Clarendon. The other portion of the unnamed parish was aligned with Clarendon. Land to the south of the Clarendon was carved off to create the parish of Vere. Other additional parishes were also created during this period: St. Thomas in the Vale, St. John and St. Dorothy. St Mary was enlarged and St. George made smaller. The area known today as Hanover and a part of Westmoreland combined to make an unnamed parish.

A New Map of the Island of Jamaica by Herman Moll, published in 1717

Kingston was officially declared a parish in 1713, but it is being mentioned here, outside of its correct chronological placement, because of the special circumstances behind its creation. Two weeks after the destruction of Port Royal by an earthquake in 1692, which killed about 3,000 people , the government bought 200 acres of land located in St Andrew, from Sir William Beeston for the erection of a new town called Kingston. The land was bought to develop a settlement for the Port Royal survivors who had been displaced by the earthquake. In the ensuing years, as the dust settled and the horrors of the earthquake began to fade from memory, the settlers began returning to Port Royal. But, in 1703, Port Royal was again destroyed, this time by fire, forcing the settlers to return to Kingston and other parts of St Andrew. Kingston eventually grew into a major city supplanting Port Royal as a major town for commerce and port of trade. It was eventually formally declared a parish in 1713, increasing the total parishes to 17.

In 1703 a portion of St. Elizabeth was carved off and annexed to the "Unnamed" parish and given the name Westmoreland. This was an apt description as it was truly the westernmost parish. This change did not impact the number of parishes as it was a redefinition of borders.

In 1722, the Duke of Portland became Governor and an 18th parish was named after him the following year. Portland was created in 1723 by carving off and combining parts St. George and St. Thomas. The parish of Hanover was also established on November 12, 1723 from a section of Westmoreland, making it a total of 19 parishes.

George Dionysius Ehret - An copperplate engraved map of the island. Published for inclusion in "The Civil and Natural History of Jamaica, c1757"

The Creation of Jamaica's Counties in 1758


In 1758 the island's parishes were divided into three counties: Cornwall, Middlesex and Surrey

The 20th parish of Trelawny was created in 1770, when the wealthy planters in St James and St Ann, who deemed they were too far from administrative centers, succeeded in having sections of both parishes combine to form the new parish of Trelawny. Trelawny was named after Sir William Trelawny then Governor of Jamaica, whose prominent family originated from the manor of Trelawny in the parish of Pelynt in Cornwall, England. The first capital was Martha Brae, located 3 kilometres (1.9 mi) inland from Rock Bay.

The Duke of Manchester governed Jamaica between 1808 and 1811. The parish of Manchester was created in his name in 1814, bringing the total to 21.

Jamaica by Harvey Newcomb, published in 1854

In 1839, Sir Charles Metcalfe became governor of Jamaica. In 1841, the year before he left office (1842), Metcalfe parish was created from St. George and St Mary, resulting in 22 parishes.

In 1866 eight parishes were eliminated through consolidation, leaving the fourteen parishes that exist today. 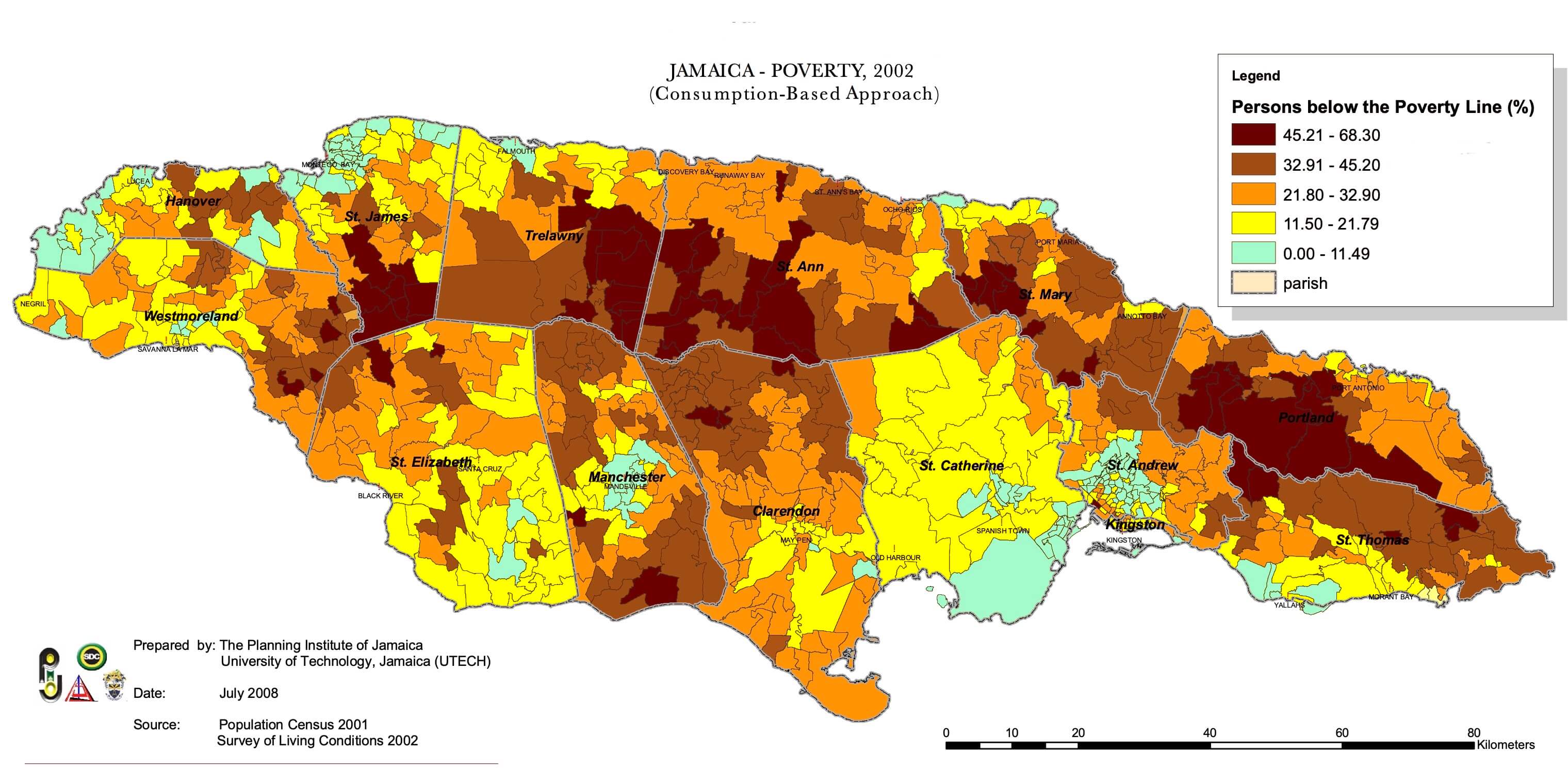